The Loudoun County Board of Supervisors adopted Metrorail Service Districts, designed to fund the Metrorail Silver Line extension to Loudoun County. The service districts, which are located in the areas surrounding the three planned Loudoun County Metro stations, are designed to help pay for the construction of the Silver Line to this area of the county and for the ongoing costs of providing the Metrorail service at those stations. An additional real property tax may be levied in the districts for these purposes, at a maximum rate of $0.20 per $100 of assessed property value. 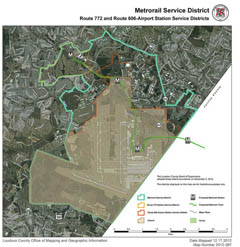 The Board of Supervisors adopted the Metrorail Service Districts in December 2012. In March, 2013, the Board directed that minor errors to the map be corrected. The item regarding the corrections, prepared for the Board business meeting of March 6, 2013, and the Copy Teste, a summary of the Board's official action, are online:

Adoption of the districts came after an extensive public process, including public information sessions attended by representatives from the county’s Department of Management and Financial Services, the Office of Transportation Services, and the Public Affairs and Communications Division, along with representatives from the Washington Metropolitan Area Transit Authority and the Metropolitan Washington Airports Authority.

The Office of Mapping and Geographic Information has prepared a set of Metrorail maps.